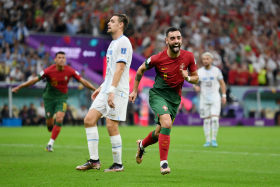 Portugal's place in the knockout stages of the 2022 World Cup is secured after a 2-0 win over Uruguay at the Lusail Iconic Stadium, Lusail on Monday night.

It was a touch of revenge for the Portuguese who were beaten 2-1 by the South Americans in the round of 16 of the 2018 World Cup in Russia.

Portugal's win was inspired by the in-form Manchester United attacking midfielder Bruno Fernandes who found the net twice, the first clearly from a cross in the 54th minute and the second from a trademark penalty in stoppage time.

Fernandes' first goal was initially given to Cristiano Ronaldo but it was later confirmed that the former Manchester United striker did not head in the cross from his teammate before the ball ended up in the back of the net.

Nigeria legend Austin Okocha, in his post-match analysis, revealed that Ronaldo attempted to steal the goal, just like any other striker.

The three-time World Cupper said on SuperSport : "I love the celebration there which every striker does, try to claim any goal opportunity, but unfortunately for him there are cameras everywhere now. It was clearly Bruno's goal."

Okocha praised Ronaldo for making the run and jokingly added that he would give the assist to the Portugal number 7.

"Credit to him for the run, I can give him the assist. Great assist for Ronaldo but unfortunately for him he didn't claim that one," he concluded.

Uruguay will have to win on the final matchday in Group H when they face African side Ghana at the Al Janoub Stadium, Al Wakrah on Friday, December 2.