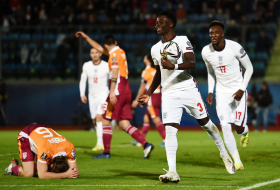 Manchester City's England star Jack Grealish has revealed the exchange he had with Bukayo Saka's Nigerian dad in an interview with his former Aston Villa teammate Gabriel Agbonlahor, who also has Nigerian blood flowing in his veins.

Grealish gave the lowdown on his Three Lions teammates who are competing at the 2022 World Cup in Qatar.

The Nigeria Football Federation were following the progress of Saka after he broke into the first team of Arsenal but he decided to stick with England whom he represented at youth level and went on to play a cap-tying game for his country of birth.

The Arsenal winger is proud of his Nigerian heritage and in a show of generosity he recently paid for 120 Nigerian children to undergo life-changing surgeries.

When asked about who he’d like to be with the most if he was stuck on a desert island with just a Boombox, Grealish told talkSPORT : "Saka is the best kid actually. I went up to his dad and told him ‘I love your son!’ He’s the nicest kid ever but he’s got a little bit of banter as well. He’s funny, man.

"He’s laid back but when he’s on the training pitch he’s on it. Off it he’s quite laid back and chilled.

"Do you know what, I’m going Saks. I don’t know about his music but he’d make me laugh."

Bukayo Saka was the standout performer in England's opening match of the 2022 World cup, netting a brace in a 6-2 rout of Iran on November 21.