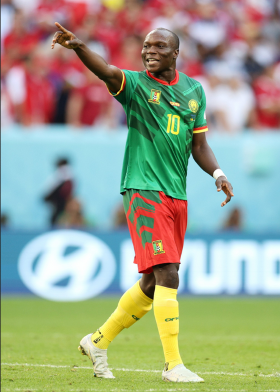 1994 Africa Cup of Nations-winning striker Efan Ekoku has delivered his verdict on Vincent Aboubakar's brilliant goal during the second half of Cameroon's 3-3 draw with Serbia in a 2022 World Cup clash staged at the Al Janoub Stadium, Al Wakrah on Monday afternoon.

In the 63rd minute, the Al Nassr star, who came on for the Indomitable Lions ten minutes into the second half, cheekily chipped the ball over Serbian goalkeeper Vanja Milinkovic-Savic.

Aboubakar did not celebrate the goal initially because he expected to be flagged for offside but the goal was awarded following a VAR check,

Three minutes later, Aboubakar was again in the thick of things, teeing up Eric Maxim Choupo-Moting, who slotted home to complete an impressive comeback.

Speaking on commentary duty for the World Cup world feed, Ekoku highlighted that Aboubakar appeared from the naked eye to be offside in the build-up to his goal.

The retired Super Eagles striker said :"That's why the eyes can be deceiving. The feet of Nikola Milenkovic was keeping Vincent Aboubakar onside. What a finish that is.

"That's the final touch of a man who believes he was offside , that's a training ground routine that you go for."

Ekoku, 55, was a member of the Super Eagles squad to the 1994 World Cup but was a non-playing substitute in all the four matches the national team played in the United States.