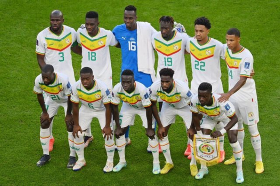 Ahead of Senegal's final group game of the 2022 World Cup against Ecuador, Nigeria legend Austin Okocha admitted that it is difficult for the Teranga Lions to replace their talisman Sadio Mane.

The Bayern Munich striker was originally named in Senegal's World Cup squad despite suffering an injury in a Bundesliga clash against Werder Bremen but was forced to withdraw from the roster as further scans showed that he would require surgery.

Okocha has insisted that Watford dazzler Ismaïla Sarr cannot step into the shoes vacated by Mane who creates a lot of havoc in the attacking third.

Speaking on SuperSport just before the start of Ecuador v Senegal, Okocha said : "Ismaïla Sarr has done well so far for this national team of Senegal but to be honest he's not Mane.

"Those are the kind of players that are difficult to replace because their presence alone does create a lot of chaos in opponents defence. "

The three-time World Cupper went on to praise the Senegalese team for their work ethic and fighting spirit, and believes that manager Aliou Cissé is doing an outstanding job in those areas.

"One good thing that this Senegalese team has got right from years back is heart. They are fearless and they believe they can beat anybody.

"Also the character of their manager has been passed on to this team. I managed to play with him , he wasn't the most brilliant player but he had heart.

"You can see from this Senegalese team that what they have going for them now is team spirit because they are missing crucial individual players like Mane who finished second in the  Ballon d'Or."

African champions Senegal have to beat Ecuador to advance to the last sixteen of the 2022 World Cup.