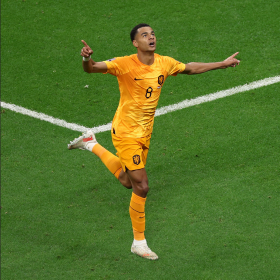 Three-time World Cupper with the Super Eagles, Austin Okocha is impressed with the form that Cody Gakpo has shown at the 2022 World Cup for the Netherlands.

Netherlands took top spot in Group A with seven points, one more than African champions Senegal, after their 2-0 victory over Qatar on Tuesday evening.

The in-demand PSV Eindhoven striker opened the scoring against Qatar with a lovely effort from just outside the box in the 26th minute.

🇳🇱 players that have scored in three consecutive #FIFAWorldCup games:

And in doing so, he followed in the footsteps of Johan Neeskens (1974), Dennis Bergkamp (1994) and Wesley Sneijder (2010) who scored in three consecutive World Cup games for the Netherlands.

Whilst Okocha noted that the Netherlands were not at full throttle during the group stage, he singled out Gakpo for special praise.

In his halftime analysis on SuperSport, Okocha said : "It's well deserved, it's not a surprise because we said it they will want to finish top of the group and the man in form (Cody Gakpo) has been the one that scored the only goal in this half. "

He added at the end of the Netherlands v Qatar clash : "They've not really played well, dominated games, but they've gone out of this group unbeaten and they have something to build on.

"They finish top. Who knows the route that they will take now. They might face weaker opponents and that might give them the chance to go very far in this competition."

Netherlands will face the second placed team in Group B in the round of sixteen of the 2022 World Cup.