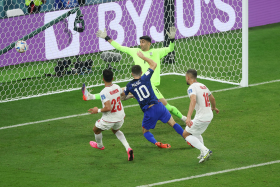 Chelsea forward Christian Pulisic lived up to his nickname "Captain America" as he led the United States Men's National Team to the knockout rounds of the 2022 FIFA World Cup holding in Qatar.

The United States of America defeated Iran 1-0 in a Group B matchday three encounter played at the Al Thumama Stadium, Doha on Tuesday night.

Pulisic put the Americans ahead in the 38th minute with a right footed strike from within 12 yards, but was injured after finding the net and had to be substituted at halftime. .

The former Borussia Dortmund youngster has performed spectacularly for the USA in this edition of the World Cup.

The win seals America's passage into the next round, having finished in second place with five points from three games.

Pulisic's performance has drawn several reactions from Nigerian fans, with many believing that he turns up anytime he is on duty for his nation.

Here are some of the best tweets on the night :

Pulisic!!!! The Lebron James of Soccer!!!

Pulisic only looks bad when he’s putting on that blue jersey for Chelsea.

When he’s playing for his country side it’s a different story.

Pulisic Mr Captain America does the business! I hope Potter is watching #WorldCup2022