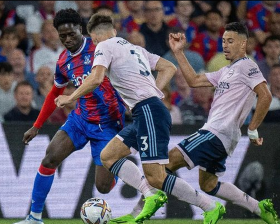 Malcolm Ebiowei has  emerged as a transfer target for League One club Sheffield Wednesday.

According to Alan Nixon via Football League World, Sheffield Wednesday are one of the clubs interested in sighing the 2019 Golden Eaglets invitee on loan in the January transfer window.

The Crystal Palace starlet has also been linked with moves to Hull City and Derby County but a return to the latter, where he spent the whole of last season, looks unlikely at this stage.

Ebiowei needs to be playing regularly if he is to be considered for a place in the Young Lions roster to the 2023 FIFA U20 World Cup and there's a strong possibility of the winger departing Selhurst Park on a temporary basis when the transfer window reopens for business.

Crystal Palace are reportedly prepared to sanction a loan move for the former Arsenal and Chelsea schoolboy as manager Patrick Vieira cannot offer him first team football, with the likes of Wilfried Zaha, Eberechi Eze, Michael Olise, and Jordan Ayew ahead of him in the pecking order.

Ebiowei has logged 57 minutes from a possible 1,440 in all competitions since the start of the season.