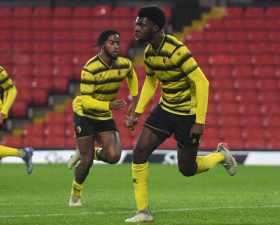 With a statement on their official website, Championship club Watford have announced that promising striker Tobi Adeyemo has been loaned out to non-leaguers Hitchin Town.

The 17-year-old has joined the Southern League Premier Division Central side until December 25 on work experience.

The transfer was completed in time for Adeyemo to make his debut for Hitchin Town in their 2-1 win over Redditch United in a league game on Monday, coming off the bench in the second half.

The Anglo-Nigerian netted against Chelsea in the fourth round of last season's FA Youth Cup and has made some appearances for the U21 team of the Hornets in the 2022-2023 campaign.

Hackney-born Adeyemo has been on the books of Watford since October 2018 and signed a scholarship with the Vicarage Stadium outfit in the summer of 2021.

Meanwhile, Watford's first team held a training camp in Spain in preparation for the resumption of the Championship, with Nigeria international trio William Troost-Ekong, Maduka Okoye and Samuel Kalu part of the group that traveled to Algorfa.