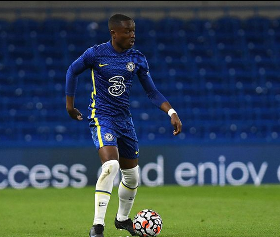 Chelsea started preparations for the second half of the 2022-2023 season on Tuesday, November 29, after a fortnight away from their Cobham training base.

As many as twelve Blues first team players are currently away on international duty with their respective nations at the ongoing World Cup in Qatar.

Carney Chukwuemeka was not pictured training with the first team players and it remains to be seen whether the central midfielder will be named in the traveling squad to Abu Dhabi for a mid-season training camp.

The England U20 international has not figured for Chelsea since appearing as a substitute against Manchester United on October 22 due to a hamstring issue.

Exciting fullback Abu has been promoted to first team training several times this season but has not received a call-up for a competitive match.

Chelsea and Aston Villa will compete for the inaugural CBF | Al Wahda Challenge Cup on December 11 at the  Al Nahyan Stadium in Abu Dhabi.