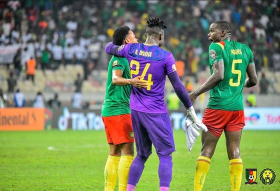 Former Super Eagles left-back Ifeanyi Udeze on Wednesday expressed his opinion on the face off between Indomitable Lions of Cameroon head coach Rigobert Song and goalkeeper Andre Onana and hopes the clash of ego in the team does not affect the desire to qualify for the round of 16 of the World Cup.

Cameroon drew 3-3 with Serbia in their Group G game with Onana conspicuously missing from the lineup and the team will play tournament favourites Brazil on Friday as they hope to reach the knockout stages.

Inter Milan first choice goalie, Onana, has been sent away from the team's World Cup camp over his disagreement with former international Song over team tactics.

In defense of the player, Udeze spoke on Brila FM Wednesday and said it was a situation that could have been handled differently and explains why players seemingly disrespect their coaches in Africa.

"I believe this issue could have been settled amicably in the interest of the country. The team is involved in a major tournament. This is the World Cup.

"But another factor that could make a player revolt, not categorically in this case though, is that most African coaches don't respect themselves.

"When most coaches ask players for 'perfumes' how would they respect you," Udeze ominously stated.

Reacting on the interference in the team by the Cameroon Football Federation President, Samuel Eto'O who backed Song's decision to axe the keeper from the team, Udeze insists that it's becoming increasingly unpopular.

"Etoo is trying in FECAFOOT but his interference in the national team is too much," Udeze maintains while countering the opinion of former Nigeria international Sambo Choji whose recorded voice was played on air expressing his support for Song.

"Choji is my guy. He's my friend but on this topic, he doesn't know what he's saying, yes.

"Eto'o was wrong to interfere in the matter between coach and player," the onetime West Brom defender said.