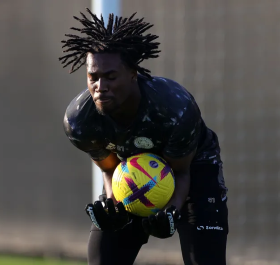 The Foxes are holding a warm weather training camp in the United Arab Emirates as part of their preparations for the resumption of the Premier League after the World Cup break.

Seven Leicester City players are taking part in the World Cup including goalkeeper Danny Ward who was in goal in Wales' 3-0 defeat suffered at the hands of England on Tuesday.

Ward's absence opened the door for Chibueze to be named in the traveling squad.

A former Chelsea schoolboy, the 18-year-old Chibueze represents Leicester City's development squad and will be aiming to catch the eye of Rodgers during the training camp.

Nigeria internationals Wilfred Ndidi and Kelechi Iheanacho have been training with the Leicester squad since Monday evening in Abu Dhabi.