'Hope Potter is watching', 'Has been superb' - Nigerians react to Ziyech's display for Morocco 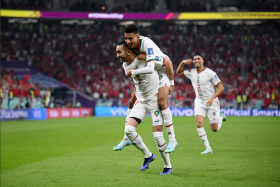 The Atlas Lions of Morocco have emerged as the second African team to qualify for the knockout rounds of the 2022 FIFA World Cup holding in Qatar after defeating Canada.

Hakim Ziyech fired the North African nation ahead in the 4th minute with an outside of the box lob after the Canadian goalkeeper misplaced his pass.

The lead was extended to two when Sevilla star Youssef En-Nesyri shot home a right footed shot from within the box in the 23rd minute.

Canada pulled one back courtesy of an own goal from Morocco and West Ham United defender Nayef Aguerd in the 40th minute.

With the game ending 2-1 in favor of Morocco, they become the first African nation to win their group in the ongoing World Cup.

The Atlas Lions finished first with seven points from three games played, ahead of Croatia, Belgium and Canada in that order.

Ziyech's inspiring performance that earned him the Man of the Match award has made Nigerians football lovers applaud him.

Here are some of the tweets below :

Credit to the manager Regragui

🗣️ “When you give him love and confidence, he will die for you. pic.twitter.com/aUcTMMgqni

Apart from the first game, I think Ziyech has been superb for Morocco in their last two games.

Dear @FisayoDairo you need to visit the Moroccan camp and apologize to Ziyech. “He has an idea of how to play football and he can also play football”. 😎 https://t.co/PcClX9aSxw

Ziyech is ball in the World Cup man. Chelsea is the issue

It is now clear to me that Chelsea players are not the problem but the management.
Ziyech Morocco qualified. Kovacic Croatia qualified. 💙💙💙

Ziyech, koulibaly, and pulisic taking their countries to R16

It is a Chelsea thing💙💙

this world cup is some sort of redemption for Ziyech. happy for him

I just hope Potter is watching Ziyech. I no wan dey see mount or sterling for line up after world cup.