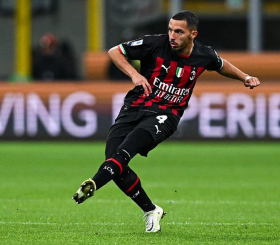 Carlo Laudisa in a chat on Carlo Pellegatti's Youtube channel (via Milan News) revealed that the former Arsenal midfielder changed agents due to him looking forward to earning a salary higher than the €4.5m offered by the Italian giants.

The 25-year-old's contract with the San Siro lords is set to expire in the summer of 2024, and it's believed that with the player's requests may force Milan to accept any reasonable offer that comes in for him.

According to Italian news outlet, Gazzetta dello Sport, Premier League log leaders Arsenal are interested in bringing Bennacer back to the North London based outfit.

Apart from the Gunners, Liverpool and Chelsea have also  identified the Algeria national teamer as a transfer target ahead of next season.

The interest shown from top guns in the English topflight is detrimental to the stay of Bennacer at Milan beyond the summer of 2024.

Bennacer has made 21 appearances for his employers this season, and was part of the Milan squad that won the Scudetto last term.