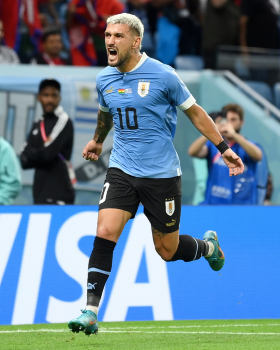 Ghana face a monumental task to quality for the knockout rounds of the 2022 World Cup as they are trailing by two goals against Uruguay in their final group game at the Al Janoub Stadium.

It could have been a different story had Andre Ayew found the net from the penalty spot in the 21st minute.

The Black Stars were punished for not taking that chance as De Arrascaeta put the South Americans ahead with a close range header five minutes later and in the 32nd minute he volleyed home to make it 2-0 after a brilliant assist from Luis Suarez.

1994 Africa Cup of Nations-winning striker with the Super Eagles, Efan Ekoku, who is on commentary duty for the World Cup world feed, highlighted that poor defending led to Uruguay's opener and ingled out Jordan Ayew and Daniel Amartey for criticism.

"Not clever play at all from Jordan Ayew, communication perhaps lacking. That's got to be dealt with, not once but twice," Ekoku said.

"No reason for Daniel Amartey to go to ground, he's under no pressure. That's a wild swing, off balance.

"It's a decent save from the goalkeeper Lawrence Ati Zigi. He will be disappointed that one of his teammates was not able to clear that. Just a little bit outnumbered on the far post. As simple as you like 1-0."

Reacting to Uruguay's second goal, Ekoku said : "Luis Suarez with a clever flick, the awareness. And any kind of ball, enough pace on it before he is closed down by Daniel Amartey who's going to make it difficult.

"That's a terrific strike, the technique to get over the football, keep it down. Sweet strike, so close to the goalkeeper but never easy to stop because you really can't get your hand down so quickly."

A win will definitely see Ghana progress to the last sixteen of the World Cup but a draw could still send them to the next round if South Korea beat already qualified Portugal.