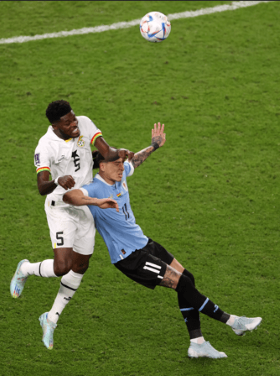 Former Super Eagles striker Julius Aghahowa believes Ghana handed Uruguay the initiative early in their final Group H match at the Al Janoub Stadium, Al Wakrah on Friday evening which led to the elimination of the Black Stars from the 2022 FIFA World Cup in Qatar.

Uruguay defeated the team coached by Otto Addo 2-0 thereby denying the west Africans a chance of exerting revenge as Uruguay eliminated them in the quarterfinals via penalty shootout in the 2010 World Cup in South Africa.

Captain Andre Ayew also missed a first half penalty to further dampen Ghana's chances of progressing to the knockout stages.

"Ghana got it wrong from the start, there was no spirit of urgency in their play," Aghahowa said ruefully on Brila FM, Lagos on his analysis of the game.

"The fire started from the second half when they were already 2-0 down. If they had started that way from the first half, things might have looked differently

"They were punished, they fought for it but it was not enough to secure a win or even a draw," the onetime Wigan Athletic striker concluded.

Portugal and South Korea qualified from the group as the Asians defeated Cristiano Ronaldo and co 2-1  in the other group game.