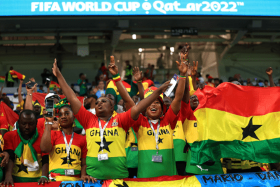 The Black Stars have crashed out of the 2022 World Cup after a 2-0 loss to Uruguay in a Group H matchday three encounter played at the Al-Janoub Stadium on Friday evening.

The West Africans were awarded a penalty in the 20th minute after Mohammed Kudus was fouled by goalkeeper Sergio Rochet Alvarez.

The skipper of the Ghanaian side, Andre Ayew stepped up and got his left-footed shot saved by the Uruguay glovesman.

This will be the second consecutive time that Ghana will be missing a penalty kick against the South American nation, with Asamoah Gyan failing to convert twelve years ago.

In the 32nd minute, Arrascaeta got his second of the game after finishing off a flicked ball from Luis Suarez with a volley.

Despite the win, Uruguay also failed to make it out of the group stages after falling short due to having scored fewer goals than South Korea.

The miss by Ayew has drawn the attention of Nigerians, with many believing that his time in the national team is up.

Here are some of the best tweets:

It's already costing then.

Those ayew sold the team out.

After that Ayew penalty miss, #GHA    switched off mentally. #URU    smelled blood and saw the look on the #GHA    players' faces, and they are putting the screw to them. Black Stars can't wait for half time to come quickly enough. #Qatar2022

In my own honest opinion the best person for that penalty was Inaki , his composure and level of confidence as a striker is top notch . The other Ayew’s son should completely stop playing football . Way too selfish with no skill for a team sport!

God knows I never liked Andre Ayew and no one should blame this on pressure in just 20mins cos Asamoah Gyan had this actual pressure (last kick of the match) in 2010. How could you hit a penalty like that? So weak and lack actual placing.#GHAURU

Not impressed with performance of the ayew brothers. How will you dash out a penalty like that. #Qatar2022