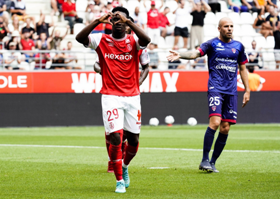 There was no England consideration and no USA men's national team selection either for the 2022 World Cup for Folarin Balogun.

This is the time that the Arsenal striker must realize that his best shot at international football is best served playing for Nigeria, the country of his origin.

Balogun is on loan at Ligue 1 side Reims where he is considerably doing well. Before the international break for the World Cup, the Hale End Academy graduate had scored eight goals in 15 games for the French side.

However, it will be very difficult for the 21 year-old to break into an England squad that still has Harry Kane who is not retiring just yet.

Behind the Tottenham Hotspur superstar are the quartet of Marcus Rashford, Callum Wilson, Tammy Abraham and Ivan Toney.

It could take the retirement or a long injury layoff of at least three senior striking members of the Three Lions for Balogun to be considered even an outsider for an England spot.

Perhaps it is arguable that USA is a better option for Balogun in comparison with England. But in terms of winning laurels at the global stage, Nigeria is the best option for him.

Nigeria may not have been at the 2022 FIFA World Cup in Qatar but the three-time African champions could be phenomenal in a given tournament on their day.

The USA 94 and France 98 World Cup performances gave a hint of what Nigeria can offer at world football.

Not many pundits believed that Nigeria would win the football tournament of the 1996 Atlanta '96 Olympics. It was a team brimming with already established senior national team players.

This could be hypothetical but when a golden generation of Nigeria's men's national team is juxtaposed to that of the USMNT, and the question is: 'who is likely to win the World Cup?

The answer is likely to be Nigeria as the west Africans have produced better players over the years.

The point made above is of course debatable but football (soccer, as the Yankees call it) is clearly not the USA' s king of sports

Poor administration and sometimes poor choices of coaches are the bane of Nigerian football. The inert player talent is undoubtedly flowing in the country - and of course abroad.

Allnigeriasoccer.com's opinion was not shared by a few Nigerians who spoke on the subject.

A Nigerian man with the nickname 'Gbagamus' a regular caller at some of the country's most listened-to radio stations countered the argument.

"USA easily over Nigeria for me. England won't be the best for him, 100%

"Don't get me started on how NFF and the sports ministry as a whole are not serious," Gbagamus further told All Nigeria Soccer.

Another responded Mr Alexander who is a keen follower of the 2022 FIFA World Cup said unequivocally:

"If you like put Messi in this Nigerian system, e go still burst."

Alexander believes poor football administration is the bane of the game in the country.

Brilliant ideas by those we spoke with.

But If well managed by a technically gifted coach and leadership crisis is not a big problem, Nigeria still has the potential of becoming Africa's first winners of the FIFA World Cup as predicted by Brazil and global football legend,  Edson Arantes do Nascimento, best known as Pele.