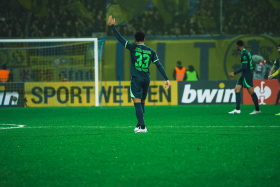 Premier League leaders Arsenal have been handed a boost in their pursuit of VFL Wolfsburg's African  winger Omar Marmoush.

Omar is expected to leave the Bundesliga outfit on a free transfer after his contract at the Volkswagen Arena was not renewed.

While on loan with Stuttgart, Marmoush revealed his desire to play in the English topflight, which led to speculation that he might end up at the Emirates Stadium in the summer.

He did, however, return to Wolfsburg and has since played in each of the team's 15 league games while contributing three goals across all competitions.

The Egyptian international's contract expires at the end of the current campaign, and after attempts to reach an agreement on a new one failed, Wolfsburg are reportedly considering selling Marmoush during the winter transfer window in an effort to earn money from the departure of the 23-year-old.

According to the German news outlet Wolfsburger Allgemeine Zeitung via Football London, the parties are pondering the proper decision for both the winter and summer.

The Gunners aren't the only one interested in the Cairo born winger, as he is also attracting interest from Borussia Dortmund and Borussia Monchengladbach.

Asides Marmoush, Arsenal are also reportedly interested in Mykhaylo Mudryk and Cody Gakpo ahead of the January transfer window.