Battle of Lions : Bolton legend Okocha insists Senegal have what it takes to beat England 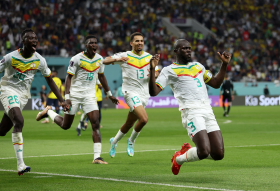 Bolton Wanderers legend Austin Jay-Jay Okocha is backing the Teranga Lions of Senegal to beat the Three Lions of England when both teams face off in a  round of sixteen World Cup clash at the Al Bayt Stadium on Sunday evening.

Senegal booked their place in the knockout rounds thanks to a dramatic 2-1 win over Ecuador with Chelsea star Kalidou Koulibaly netting the game-winning goal, while England easily topped Group B after thrashing Wales.

Highlighting the strengths of the African champions, Okocha noted that they have several players with Premier League experience which is a fact.

Okocha revealed that the England side are a lot more predictable these days and don't have players who can decide games single handedly.

Asked by Supersport presenter Thomas Mlambo on how he sees the game turning out, Okocha replied : "Number one team in Africa, I think they have what it takes to win the game because I don't think it will be an upset if Senegal wins.

"They have got players that play in the Premier League, players that know the English players and they know what they are coming up against, and they have looked at them.

"The England team is predictable in my opinion. They don't have players that have got so much flair to decide games so they rely on that team structure. Senegal have a good chance.

"England are not that physical, aggressive side anymore. They have changed their way of playing, they have adopted this complete football, trying to build from behind, go through the wings and put in crosses which is predictable."

Everton midfielder Gueye will miss the game against England due to accumulation of yellow cards.