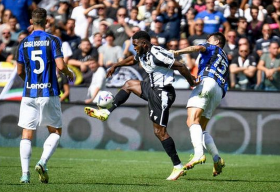 With a statement on their official website, Italian Serie A club Udinese have announced that 2013 U17 World Cup-winning striker with the Golden Eaglets, Isaac Success has signed a new deal.

Success has penned a new contract running until  June 30, 2024  - reward for his outstanding performance in the shirt of the Little Zebras.

The BJ Foundation Academy product returned for a second spell at Udinese in August 2021 and has endeared himself to the fans with his energetic work rate and penchant to assist his teammates.

In 41 all-competition appearances for Udinese, he has mustered thirteen assists - same number he registered in 137 matches combined for Watford, Malaga and Granada.

Success has provided assists in each of his last three matches in the Italian Serie A,

The Benin City native has been involved in every single game played by Udinese this season, seventeen in total, of which nine were starts,

Success has managed four goals in an Udinese shirt - two in the Serie A and two in the Coppa Italia.