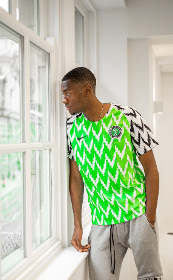 Today, we look at a young player with a promise but who is still hoping to get his chance of playing for his adopted nation England.

But allnigeriasoccer.com believes this defender is a bright choice for the future and ultimately for the Nigerian national team.

Will he eventually choose the Super Eagles over the Three Lions?

Fulham defender Tosin Adarabioyo is a young prospect whose career has shown that if he plays consistently and at the top level there is a big chance he will become a great player.

Tosin, born in England, was approached by some officials of the Nigeria Football Federation over the possibility of changing allegiance in order to play for Nigeria.

The Manchester City academy product  was said to have rejected the offer to play for Nigeria as he awaits a chance to represent the Three Lions of England albeit his current opinion is unknown.

Fikayo Tomori, Chris Smalling, Marc Guehi and even Ben White are all ahead of Tosin in the power rankings of English defenders.

The desire of a number of players of Nigerian heritage to play for England or indeed any other country is understandable.

Tosin is a rangy player whose aerial prowess is an asset to the team he plays for.

The central defender's concentration level needs to be improved though for him to be a more rounded center back.

The defender who has scored one goal in 10 league appearances this season, playing a total of 900 minutes of league football tends to lose a striker he is supposed to stop at crucial times.

Tosin is 25 year-old and is still at a good age to improve his skill set. He will be 26 years old when the next Africa Cup of Nations and could be a good asset to the Super Eagles.

Now this is not to say that Tosin must be begged to play for the father of his parents.

The point of this feature is to point out that there is a better chance of him playing international football with the Super Eagles of Nigeria with the first choice of William Troost-Ekong and Leon Balogun no more as effective as they were few years ago.

Tosin's supposed resolve and patience for a place in England's team may not be unconnected with the age profiles of the likes of captain Harry Maguire and Conor Coady.

The English central defenders are both 29 years old and may not be young enough to have a key role in the team when the next World Cup comes up in 2026.

Tosin could be a good option for the Nigerian national team but it will be up to him to decide whether to see the need to stick with England or be a star with Nigeria.