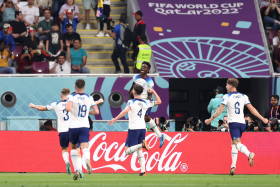 London-born Nigerian striker Adebayo Akinfenwa is understandably rooting for England to beat Senegal when both countries face off in a round of 16 World Cup clash at the Al Bayt Stadium, Al Khor on Sunday evening.

The Wycombe Wanderers legend says he has been impressed with the performances of Three Lions captain Harry Kane even though the Tottenham Hotspur superstar has yet to get his name on the scoresheet.

2018 World Cup Golden Boot winner Kane has been contributing when he is not scoring, with three assists to his name in four matches in Qatar.

Akinfenwa warned the Three Lions players that they should take Senegal seriously, noting that they are African champions and highlighted the two major strengths of the Teranga Lions.

The 40-year-old is positive regarding his prediction for the match, citing the fact that England have several players in their squad who have played in major competitions.

"African champions, they're no joke. Before the tournament I was saying that they are the ones I was most excited other than England to watch, and then Mane got injured, but they still navigated their way through ," Akinfenwa said to England's official YouTube page.

"They are no joke, they are going to be physical. We know how Senegal play, we know how the African teams play with the combination of technical and physical strengths, but I do think England will be able to maneuver.

"My score prediction, I think it will be 2-1, I think Kane will get on the scoresheet. I know strikers are judged on goals but his all-round game has been descent, I think he gets a goal today."

As for team news, onetime Nigeria Football Federation Bukayo Saka is back in England's starting lineup in place of Marcus Rashford.

The Arsenal winger announced his arrival at the World Cup in a big way, with two goals in England's 6-2 rout of Iran.