Aghahowa explains why Croatia defeated Japan and Modric was not effective 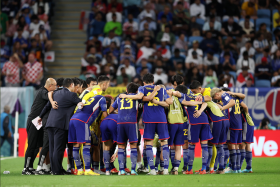 The 2018 FIFA World Cup finalists defeated the spirited Asians 3-1 on penalties after the game ended 1-1 after 120 minutes of football.

Aghahowa who is one of two regular analysts for Brila FM Lagos for the coverage of the 2022 World Cup noted that it could have been a different outcome if the Japanese side had been a bit more ambitious.

"Croatia showed that they wanted the win more. They applied the pressure, ran a bit more and certainly created more goal-scoring chances.

"Penalties is a dice. It's down to luck but the Japanese had the chance to convert their chances which they didn't.

"The Japanese ought to have up the ante and win in extra time. They haven't had the luck in penalties but it's football and you never can tell how things will turn out.

"The game was balanced but at extra time the players were tired and both teams needed fresh legs (Modric was subbed off almost immediately).

Aghahowa stated that the decision to play Real Madrid midfield dynamo Luka Modric a bit deeper in midfield affected the chances of the Croats to put away their numerous chances which Japan failed to take advantage of.

"Modric played too deeply so his creative best was not utilized by Croatia.

"Japan failed to make this count but despite the defeat they have fought a good fight. In this World Cup, they produced some results that are now in the history of the tournament.

Croatia will play the winner of the contest between Brazil and South Korea.