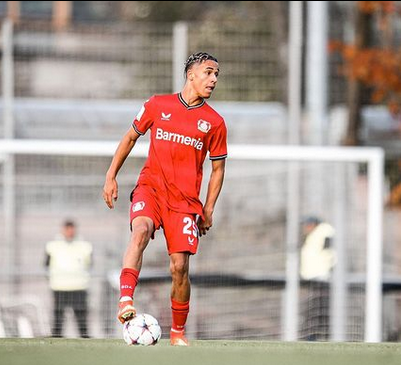 Flying Eagles-eligible defensive midfielder Isaiah Okafor made his non-competitive debut for the first team of German Bundesliga club Bayer Leverkusen as they suffered a 3-0 defeat at the hands of Glasgow Rangers in a friendly on Saturday.

Isaiah is the younger brother of cap-tied Switzerland World Cup star with a Nigerian background Noah Okafor, who played three matches for the Swiss in Qatar before they were eliminated by Portugal.

The 17-year-old Isaiah joined Bayer Leverkusen from the youth team of FC Basel.in the January transfer window and initially played for the U17 team before he was promoted to the U19s.

Bayer Leverkusen manager Xabi Alonso handed Okafor his debut in the 73rd minute, bringing him on to replace Hlozek.

Okafor will be aiming to feature in Bayer Leverkusen's final game before the Christmas break - a friendly against FC Zürich at the Ulrich Haberland Stadium on Saturday 17 December.

This season, Okafor has made 18 appearances for Bayer Leverkusen's youth teams including six in the UEFA Youth League.