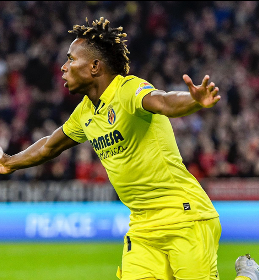 Speaking at a press conference at the José Manuel Llaneza Training Ground ahead of Villarreal's friendly with Aston Villa, manager Quique Setién was full of praise for Samuel Chukwueze, labeling the Nigeria international 'a decisive player'.

The Yellow Submarine face the Premier League side at Villa Park on Thursday night with Chukwueze in contention to feature.

Since the appointment of Setién as coach to replace Unai Emery in October 2022, the 2015 U17 World Cup winner has become an important player for Villarreal, starting five of the six matches played by the club in all competitions.

And he has immediately repaid the faith shown in him by the former Barcelona manager with a goal involvement of five (3 goals, 2 assists) in five matches.

Chukwueze managed only two starts in the first eleven La Liga matches this season under Emery and was a non-playing substitute against Barcelona.

"Samu is a decisive player in many moments, with a lot of one against one that worries the opponent. We are going to try to take advantage of the fact that he attracts rivals," Setién was quoted as saying by Jornada Perfecta.

"All the players have good things and others to improve. He is a player with enormous potential from whom we are going to try to get as much performance as possible."

Villarreal will play their final friendly after the break for the World Cup against Napoli at Stadio Diego Armando Maradona on Saturday.