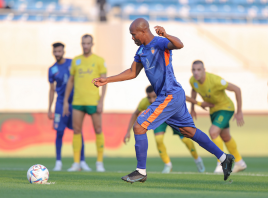 2017 Super Eagles invitee Anthony Nwakaeme was the star of the show as Al-Fayha FC claimed a 2-1 road win against
Al-Khaleej in a Saudi Pro League match held at Prince Saud bin Jalawi Stadium on Thursday afternoon.

The experienced striker was decisive, netting the opening goal before providing the game-winning assist nine minutes into the second half.

Today marks the first time Al-Fayha FC have managed to win a game in which their Nigerian star got on the scoresheet.

Nwakaeme broke the deadlock with a beautiful penalty through the middle in the seventeenth minute.

The 33-year-old netted his first goal in Al-Fayha colours in the draw with Abha Club, before scoring in back-to-back defeats to Al Shabab and Al-Adalah FC.

In his final season at Tranzonspor, he directly participated in an impressive 23 goals (13 goals, 10 assists) in 30 appearances in the Turkish Super Lig while he managed three goal involvements in other competitions.

In the provisional Saudi Pro League standings, Al-Fayha are 13th with five points from nine games.