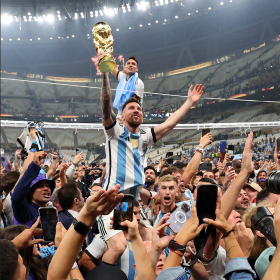 Argentina beat France 4-2 on penalties to win the 2022 World Cup after both teams totaled six goals in 120 minutes of action.

Before the showpiece, it was billed as an individual battle between Argentina's talismanic captain Lionel Messi and his Paris Saint-Germain teammate Kylian Mbappe.

The two number 10s put on a masterclass, with Messi scoring a brace and Mbappe becoming only the second player to score a hat-trick in a World Cup final after England's Geoff Hurst.

Messi sent Hugo Lloris the wrong way when he converted a penalty midway through the first half to break the deadlock and the advantage was doubled as Angel Di María finished off a spectacular team goal in the 36th minute.

Credit to France that they didn't give up. Mbappe pulled one back from the penalty spot in the 80th minute and a minute later the France striker rifled in a sublime volley to equalize.

Messi looked to have come to Argentina's rescue when he bundled home from close range to make it 3-2 but Mbappe converted another penalty to send the game to a shootout.

Nigerians, including presidential candidates in the forthcoming election Bola Ahmed Tinubu and Atiku Abubakar,  have acknowledged that Messi was instrumental in Argentina winning the 2022 World Cup and heaped praises on the Barcelona legend during and after the game.

Congratulations, Argentina. Messi is why you must never give up, no matter the situation. He was saving the ultimate last for the ultimate best👏👏. -AA #ARGFRA #FIFAWorldCup pic.twitter.com/G4S4tWLyfv

Ronaldo can never attain such😂😂

Congratulations to the newest world champions, Argentina, for a breathtaking victory over the defending champions, France.

Indeed, Lionel Messi has shown the class and flash of greatness that true champions are made of.

HE HAS NOTHING ELSE TO PROVE NOW. HE IS UNDOUBTEDLY THE GREATEST OF ALL TIME. pic.twitter.com/RbizCFBIkW

Thank you my GOAT... MESSI

#Messi𓃵 is beyond phenomenal and even as a Ronaldo fan, you just have to admit that the GOAT debate is officially over.

I can never forget how Messi was dragged by Ronaldo fans after Argentina lost their first game in this world cup to Saudi Arabia of all team.
Na the same Messi come carry the world cup bayi.

Make una just end all argument at this point. Messi is officially the GOAT.