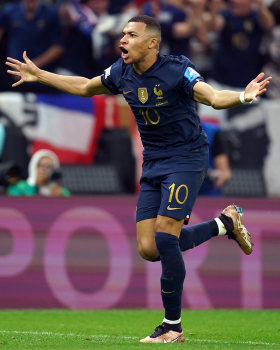 Former Super Eagles defender Ifeanyi Udeze gave his post-match reaction on France's defeat in the final of the 2022 FIFA World Cup in Qatar against Argentina on Sunday evening.

The final played at the Lusail Iconic Stadium was arguably the most enthralling final of the FIFA World Cup in recent years with the game ending 3-3 after 120 minutes of football.

Penalties were required to crown a champion of the mundial and Argentina won 4-2 after the spot kicks.

Udeze who was Nigeria's first choice left back at the 2002 FIFA World Cup in Korea, and Japan spoke on Brila FM, Lagos.

"France's approach in the beginning was wrong. They could have started the game with the intensity with which they played the second half," the onetime West Brom defender stated.

"The solution was to attack, attack and attack the Argentines. They were not supposed to relax if there was to be a change on fortunes earlier.

"They were playing 'serere' football and that wouldn't help you," the former Nigeria international reiterated.

"Aside the Messi, Cristiano Ronaldo rivalry, a lot of Africans supported France because most of their players have African backgrounds.

"They (France) did their best but congratulations to Messi. He has really worked hard to achieve this," Udeze added.

The United States, Mexico and Canada will co-host the 2026 FIFA World Cup.