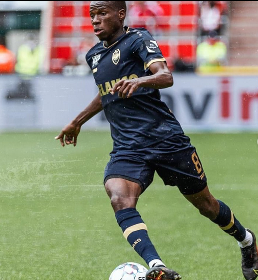 Belgian Pro League side Royal Antwerp are sweating on the fitness of Super Eagles hopeful Alhassan Yusuf ahead of their competitive return to action.

Manager of the Reds, Mark van Bommel confirmed at the pre-match press conference that the defensive midfielder is doubtful for tonight's Belgian Cup clash against Standard Liege due to injury.

Royal Antwerp are facing a crisis in the middle of the park, with Radja Nainggolan and Faris Haroun already unavailable for selection and now Yusuf and Pieter Gerken are both rated touch and go.

Van Bommel has limited options at his disposal in the midfield position heading into the match with Standard Liege as Birger Verstraete, Pierre Dwomoh and Alexis De Sart have all been loaned out.

Yususf is one of the first names on Van Bommel's teamsheet, having started every single game played by the club this season,twenty four in total, and was in action for 2,122 minutes.

In quotes relayed by HLN, Van Bommel said : "Pieter Gerkens and Alhassan Yusuf are doubtful. Just like Michel-Ange Balikwisha, by the way."

Yusuf was a player of interest to former interim coach of Nigeria now Technical Director of the Nigerian Federation,  Augustine Eguavoen and was called up for the friendlies against Mexico and Ecuador this summer.