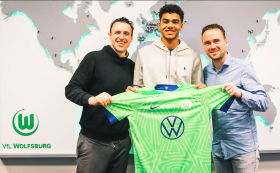 Through a statement on their official website, German Bundesliga club VfL Wolfsburg have announced that talented German-Nigerian central defender David Odogu has extended his contract.

The Wolves confirmed that Odogu has put pen to paper on a long-term contract, approximately two years after he joined the club from Union Berlin.

He is credited with 28 appearances for the U17 team of Wolfsburg in the B-Junioren Bundesliga Nord/Nordost, and was on the pitch for 2,463 minutes, scoring two goals last season.

Odogu started for Wolfsburg U19s in Premier League International Cup matches against Blackburn Rovers and Wolverhampton Wanderers in October and December respectively, going the distance in both matches.

The 16-year-old has been capped three times by Germany at U16 level and has made two appearances for the U17s.

However, the center back keeps abreast of happenings with the Nigeria national team by following the Super Eagles on social media.