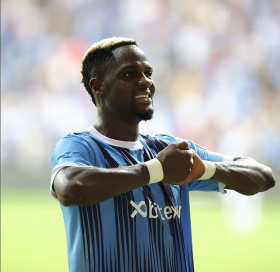 Adana Demirspor crashed out of the Turkish Cup in the fifth round after an entertaining 4-3 defeat to Rizespor at Yeni Adana Stadyumu on Thursday evening.

Heading into the fixture, Adana Demirspor have been scoring for fun in the Turkish Cup with nine goals in two matches in the earlier rounds.

The visitors led 2-0 at halftime courtesy of goals from Sefa Yilmaz and Deniz Hümmet in the 7th and 45th minute respectively.

Onyekuru had a couple of chances to get on the scoresheet in the first half but was either denied by the goalkeeper or his finishing let him down.

The Nigeria international won a penalty in the 66th minute after his close range shot struck the outstretched arms of a Rizespor defender.

David pulled one back from the penalty spot and Bahadir Öztürk headed into his own net five minutes from time to send the game into extra time.

Rizespor were in the ascendency in extra time as Kubilay Kanatsizkus and Alberk Koc found the net for a 4-2 lead, before Yusuf Sari netted in the 117th minute to set up a nervy finish.

Onyekuru and Akintola have scored four goals each for Adana Demirspor from the same number of games (14) so far this season.