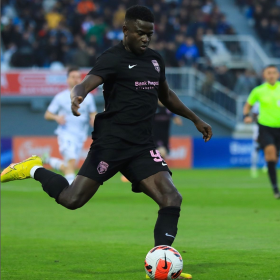 Allnigeriasoccer.com's review of the Nigerian players that found the net for their respective foreign clubs in competitive matches on Friday, December 23, 2022.
Kehinde scores

Ogbeche, a member of the Super Eagles squad to the World Cup twenty years ago, netted his eighth and ninth goals of the season as Hyderabad FC registered a 3-0 road win over Bengaluru FC at Sree Kanteerava Stadium.

The former PSG wonderkid ended his goal drought in the Indian Super League in some style, driving home a shot from distance into the bottom corner after a cleverly worked free-kick in the 26th minute.

In the 44th minute, Ogbeche extended Hyderabad's lead as he headed home via a deflection. The goal has been credited to him for now.

The number 99 broke the deadlock inside three minutes after a defence-splitting pass from a teammate.

Signed from Spanish side CD Tenerife in the summer, Apeh's standout performance this season has to be the hat-trick he scored against Qaradağ Lökbatan FK in the Azerbaycan Kuboku exactly a month ago.

Lanre Kehinde has scored his first goal in Hapoel Nof HaGalil colours after joining the club on a free transfer this month.

In what was his third appearance for Hapoel Nof HaGalil in the Liga Leumit, the center forward converted a spot kick in the 63rd minute of a 2-0 win over Maccabi Petah Tikva.