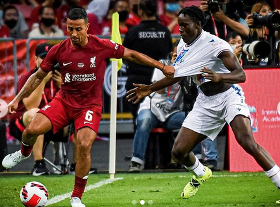 Crystal Palace continue to prepare for their Boxing Day clash against Fulham at Selhurst Park despite the festive season.

According to the official website of the Eagles, manager Patrick Vieira promoted Valencia-born Nigerian midfielder David Ozoh to first team training before the visit of the Cottagers.

Ozoh and another teenager of Nigerian descent Tayo Adaramola were among the academy stars to train with the senior squad and will be aiming to catch the eye of the coaching staff led by Vieira.

Still only 17, Ozoh has been tipped for a first team breakthrough at Crystal Palace, highlighted by the fact that he has already trained with the senior squad several times this season, and received his first call-up to the senior team in their Carabao Cup third round clash against Newcastle United at St James' Park.

In addition, Vieira named him on the roster for the club's pre-season tour to Australia and Singapore.

The talented teenager featured off the bench in pre-season games against Premier League giants Manchester United and Liverpool, and started against Leeds United at the Optus Stadium.

Michael Olise and Malcolm Ebiowei have also trained with Crystal Palace ahead of their upcoming clash.