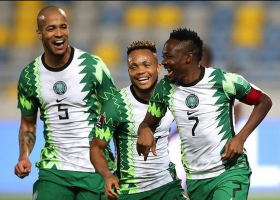 Ahmed Musa's fitness problems are over, having been called up for the last three matches played by Sivasspor in the Turkish Super Lig.

However his minutes are being carefully managed by coach Riza Calimbay, with the winger making three consecutive appearances off the bench since his return from injury.

The former CSKA Moscow star was unavailable for selection for five games in a row before the World Cup break because he was recovering from a fractured arm, an ailment that saw him sit out Nigeria's friendlies with Algeria and Portugal.

Musa played the last eight minutes of Sivasspor's 2-1 road win over Kasimpasa on Saturday, helping them reach an 800-point milestone in the Turkish Super Lig.

According to Turkish sports daily Fanatik, Sivasspor reached the landmark after 213 wins, 201 losses and 161 draws, and having played 575 games in total in the Super Lig, while averaging 1.39 points per game.

Of the 74 teams to have competed in the Super Lig since the 1959 season, Sivasspor are the 21st team to reach 800 points.

Musa joined Sivasspor on a deal until the end of the 2023-2024 campaign after mutually terminating his contract with another Turkish Super Lig club Fatih Karagümrük.