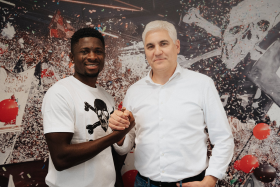 With a statement on their official website, German 2. Bundesliga club  FC St. Pauli have announced that Afeez Aremu will continue playing for the club beyond the current season.

St. Pauli have tied the former Nigeria underage international to the club on a new long-term deal after director of sport Andreas Bornemann agreed terms with the defensive midfielder on an extension of his contract, which was originally due to run out on June 30, 2023.

In August 2020, Aremu joined the Hamburg-based club from the then Norwegian Eliteserien club IK Start and adapted to the league after some initial difficulties.

Since his arrival at St. Pauli, he has featured in 53 matches including 48 in the second tier of German football and five in the DFB Pokal, logging 2,642 minutes.

In his first words after putting pen to paper on a new deal, Aremu said that he's delighted to continue his collaboration with St. Pauli.

"Hamburg has become a second home for me and my family, which is why I'm happy to continue playing for St. Pauli in the years to come.

"I'd like to thank the club for their support and trust, which I aim to repay with good performances," he told the club's official website.

Aremu and his teammates face FC Nürnberg in their first game after the winter break on January 29, 2023.