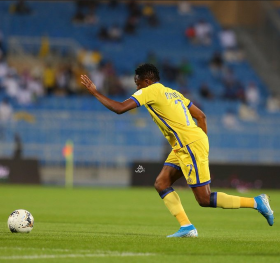 Ronaldo has signed a contract for two and a half seasons valid until June 30, 2025, and will also be an ambassador to ensure that Saudi Arabia win the rights to host the 2030 World Cup.

According to media reports, Ronaldo's salary is almost 200 million euros per year - the most lucrative contract in football history.

History in the making. This is a signing that will not only inspire our club to achieve even greater success but inspire our league, our nation and future generations, boys and girls to be the best version of themselves. Welcome @Cristiano to your new home @AlNassrFC pic.twitter.com/oan7nu8NWC

The nine-time Saudi champions confirmed the deal via their social media accounts on Friday evening , showing a photo of Ronaldo and a club official with the striker holding his new jersey.

Ronaldo will wear his iconic number 7 shirt, same number he had at the back of his jersey during stints at Manchester United, Real Madrid and Juventus.

Al-Nassr's number 7 kit was previously used by Nigeria captain Ahmed Musa, who joined the club from Premier League side Leicester City after starring at the 2018 World Cup.

In a two-year association with Al-Nassr, Musa tallied eleven goals and registered fourteen assists in 57 matches across all competitions.

The Super Eagles star was the most expensive signing in the history of the Saudi Pro League after Al-Nassr spent 16.5 million euros to bring him over from Leicester City, before the transfer record was broken by Matheus Pereira, who was acquired by Al-Hilal SFC for a fee of 18 million euros.