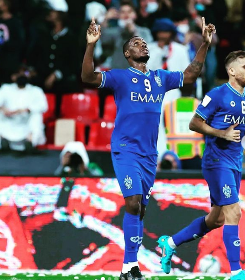 Mbappe scored 56 goals in 56 appearances for PSG and the French national team to beat prolific Norwegian Erling Haaland (46 goals) to the accolade.

Completing the top five were Bérgson  (Johor Darul Ta'zim), Germán Cano (Fluminense) and Robert Lewandowski, who tallied 42 goals for Bayern Munich, Barcelona and Poland national team over the course of 2022.

Odion Ighalo finished as Nigeria's highest ranked player in the IFFHS World's Best Goal Scorer, with a goal tally of 28 for Al Shabab and Al Hilal.

The former Manchester United striker, who's 34th in the overall rankings, mustered 21 goals in the Saudi Pro League, scored three goals in the King's Cup, and four in international competitions.

Tigres UANL striker Uchenna Kanu was the top ranked Nigerian women's player, with 22 goals combined for club and country in 2022.