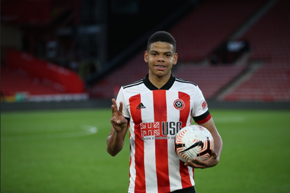 With a statement on their official website, EFL Championship promotion hopefuls Sheffield United have confirmed that Super Eagles-eligible striker William Osula has been recalled from his loan spell at Derby County.

A Denmark youth international, Osula joined the Rams on a season-long loan deal on transfer deadline day in the summer, and the agreement taking him to the League One club had a recall clause.

The Blades have informed Derby County that they have exercised the opportunity to take Osula back to Bramall Lane in January.

Aged 19, Osula appeared in twenty one official games during his time at the Pride Park Stadium, scoring five goals including a brace against Torquay United in the FA Cup.

The promising Danish-Nigerian striker made his first team bow for Sheffield United against Blackpool in March 2022 and went on to play four more matches in the Championship before the conclusion of the 2021-2022 season.

He joined Sheffield United in 2018 after playing for the youth team of Danish giants FC Copenhagen.

Osula is cup-tied in the FA Cup having played in three matches this season for the Rams, so is ineligible to suit up for Sheffield United in their third round tie at Millwall.