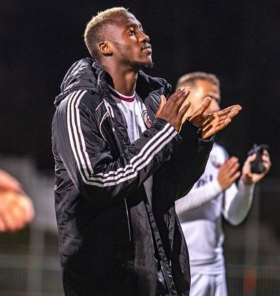 With a statement on their official website, Russian Premier League club FC Krasnodar have announced that an agreement has been reached with Zeleziarne Podbrezova on the transfer of talented Nigerian striker Moses Cobnan David.

David put pen to paper on a three-and-a-half-year contract with Krasnodar on Thursday after passing a medical examination.

The 2002-born striker has been acquired by The Bulls after putting himself in the shop window in the first half of the season.

In twenty outings across all competitions for Zeleziarne Podbrezova, David netted thirteen goals including nine in the Fortuna Liga.

He made his professional debut for Slovak club Sered against FK Senica in February 2022, and ended the campaign with nine games under his belt, scoring one goal and providing one assist.

David scored his first goal in professional football against Žilina on April 23, 2022.

He will fly to Dubai for Krasnodar's training camp ahead of the resumption of the Russian Premier League.