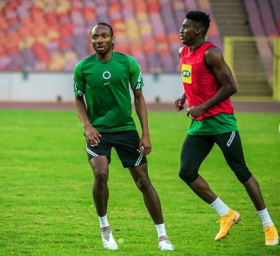 Allnigeriasoccer.com understands that Kelechi Nwakali is certainly in contention to be involved in some capacity when SD Ponferradina take on Villarreal B in a Segunda Division clash at the Estadio El Toralín (Ponferrada) on Friday afternoon.

Manager of Ponferradina, David Gallego can now call on the services of  the Super Eagles star as he has sufficiently recovered from an injury that had kept him on the sidelines since November 26,2022.

Nwakali was withdrawn in the 57th minute against Malaga after suffering a knee injury.

Los Blanquiazules struggled without their influential midfielder, earning four points from a possible twelve in the division.

If the club's last training session is anything to go by, former Espanyol coach Gallego is planning to give Nwakali minutes for the visit of the Mini Submarine.

The former Golden Eaglets and Flying Eagles skipper appeared in sixteen league games prior to his spell on the sidelines, scoring one goal and providing an assist.