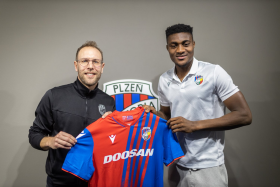 The 20-year-old has joined Viktoria Plzeň on loan from Czech second tier club MFK Karvina, with an option to buy included in the deal.

Durosinmi was having an outstanding season at MFK Karvina, where he was one of the club's key players. with twelve goal involvements in nineteen games across all competitions.

He trained with his new teammates on Monday afternoon and will fly with the first team to Benidorm, Spain on Wednesday.

In his first words as a player of Viktoria Plzeň, Durosinmi told the club's official website : "I am happy that I got such a chance.

"I watched Victoria's matches in the Champions League, they are a really big team and I have to do my best to be able to make it."

A product of Box2Box FC Lagos, Durosinmi moved to the Czech Republic two years ago, and will wear the number 17 kit at Viktoria Plzeň.