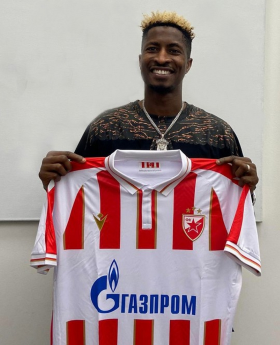 With a statement on their official website, Serbian SuperLiga champions Red Star Belgrade have announced that Super Eagles striker Peter Olayinka has signed a preliminary contract with the club.

Olayinka will officially join the 1991 European champions on July 1, 2023, after the expiration of his contract with Slavia Prague.

The 27-year-old has put pen to paper on a three-year contract with Red Star Belgrade until June 2026 with an option to extend for a further year.

Olayinka has played nonstop at Slavia Prague since the summer of 2018 after he was acquired from KAA Gent in Belgium.

In 169 outings for Slavia Prague, the 36 Lion product has tallied 43 goals and registered 23 assists.

Olayinka has played for Slavia Prague in the Champions League, Europa League and Europa Conference League including the qualifying rounds of the three European competitions.