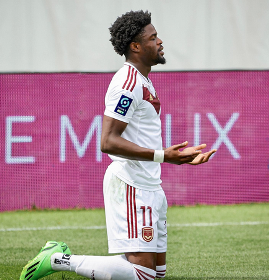 Super Eagles striker Josh Maja has achieved double digits for league goals in a single campaign for only the second time in his career after bagging a brace for Bordeaux in their 2-2 draw with SM Caen in a Ligue 2 game on Tuesday night.

The Sunderland Academy product registered fifteen league goals for the Black Cats during the 2018-2019 season before heading to France.

Maja struggled last season due to injury problems but has caught the eye in 2022-2023 with a string of fine performances in the Ligue 2.

The 24-year-old needed only four minutes to break the deadlock against Caen and doubled the advantage at minute 25, taking his tally to ten goals in the division.

Maja, who missed eighteen league games through injury last term, has admitted that he is a good physical condition and spoke about his form.

In quotes relayed by Girondins4Ever, the Bordeaux number 11 said : "We started this game well, we scored two goals early in the game, so it's good, we have to continue. Yes, it's my fourth goal in the last three matches.

"My fitness? It's just work. Hard work always pays. I continued to work with my teammates, and I hope that I will continue like that."

Maja has not figured for the national team since making his debut in an international friendly against Ukraine in September 2019.