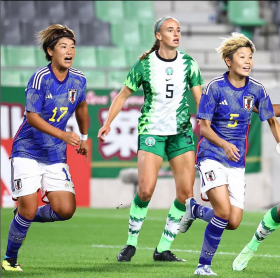 Super Falcons star Ashleigh Plumptre made her comeback from injury as Leicester City began the year with a comprehensive 5-0 rout of Sunderland in a Continental Tyres League Cup fixture at Eppleton Colliery Welfare Ground on Wednesday.

Prior to the trip to the North East, the central defender had not figured for Leicester City since going the distance in a 1-0 loss to West Ham United on November 20 because she was recovering from a hamstring injury.

Plumptre, one of the first names on Leicester City's team sheet when in tiptop condition, returned to the starting lineup against the Lady Black Cats and was in action for 61 minutes before making way for Mackenzie Smith.

She can be proud of her performance against Sunderland given that she helped goalkeeper Levell keep a rare clean sheet for Leicester City.

Plumptre and her teammates return to Women's Super League action on Sunday, January 15 when they face Brighton & Hove at the King Power Stadium.

Plumptre, a former England youth teamer, was a key member of the Nigeria squad that qualified for the 2023 Women's World Cup and her last outing for the national team was in Kobe, where she logged ninety minutes in a 2-0 loss to Japan.