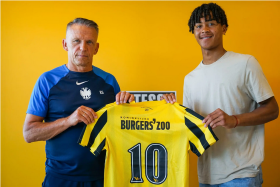 Born in the South African city of Kimberley in April 2006 to a Nigerian father and South African mother, Dokunmu also qualifies to represent the two African countries.

Netherlands have taken the first step to provisionally cap-tie Dokunmu by including him in a final selection for an U17 training camp in preparation for the Elite Round of the 2023 European U17 Championship qualifiers.

If he catches the eye of manager Pieter Schrassert Bert at the training camp, there is a strong possibility of him being named on the roster for the U17 Euro qualifying matches against England, Denmark and Northern Ireland from 22 to 28 March.

The 16-year-old Dokunmu played for the youth teams of Little Kickers, Old Parks, Randburg FC and SuperSport United before moving to the Netherlands in December 2019 together with his parents.

He signed his first professional contract with Vitesse in August 2022, a deal that keeps him at the club until June 2025.

Dokunmu has played in the last five matches contested by Vitesse in the U18 Division 2 Fall, scoring his first goal at that level against FC Groningen back in November.