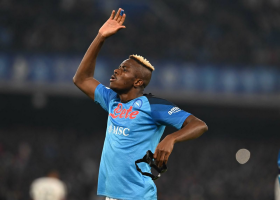 Super Eagles duo of Victor Osimhen and Samuel Chukwueze were in action for their clubs on Friday night in the Serie A and La Liga against Juventus and Celta Vigo respectively.

Villarreal drew 1-1 with Celta Vigo at the Abanca-Balaídos (Vigo) while Napoli humiliated the 'Old Lady' Juventus with a 5-1 win at the Diego Maradona Stadium.

The following are five things observed from the matches the duo were involved in tonight.

Both Nigerians assisted for their teammates on Friday night - proving to be team players as well as being ice-cool finishers.

Chukwueze found Gerard Moreno with a clipped pass and the Spaniard did the rest, unleashing an unstoppable shot that Celta Vigo goalkeeper could not stop.

Osimhen on his part, aside scoring with a header, turned provider.

Osimhen selflessly squared the ball to the Georgian winger after a sloppy clearance by Brazilian defender, Bremer.

Kvaratskhelia  opened up his body and fired the ball past Wojciech Szczęsny into the far post.

Victor Osimhen was in devastating form against Juventus and scored Friday night with two headers.

Despite the threat that he apparently possesses, the defenders in the Italian top-flight have little or no answers to the Nigerian.

He scored his 11th and 12th league goals with perfect headed goals.

There were a few physical battles in the game. Osimhen was a target a few times from the big Juve defenders.

The Nigerian also inadvertently got himself in a spot of bother - first he left a flailing arm on the cheek of  Manuel Locatelli which meant the latter required medical attention.

Osimhen then forcefully nudged Brazilian defender, Sandro to the ground.

The imposing nature of his game is not a bad idea albeit he has to be careful not to overtly do this often.

In the 59th minute of the game, Osimhen had a great chance to score again or square the ball to a teammate but he went for glory and blasted his shot wide after being closed down by his marker.

He could have racked up his numbers in the assist column with a better decision.

Samuel Chukwueze was brilliant on the night and used his pace and trickery to great effect but at few times, he didn't release his teammates on time.

The delay in getting some of the attacking moves going contributed somewhat in the scoreline not being more than it was.

But take nothing away from the winger he looked threatening with and without the ball.