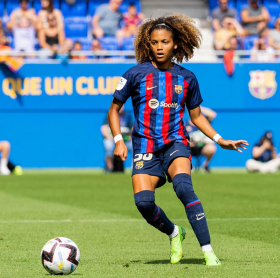 Barcelona prodigy Vicky Lopez is the only Super Falcons-eligible player named in the IFFHS Women's Youth (U20) World Team 2022 .

The German-based football statistics organization has unveiled a best XI consisting of the best player in each position, and the lineup is dominated by Barcelona with three of their players making the cut.

Born in Madrid to a Spanish father and Nigerian mother, Lopez is touted as one of the top talents in women's football.

When she made her Primera Iberdrola debut for Madrid CFF against Athletic Club on September 5, 2021, she became the youngest ever player to feature in the division at just 15 years and 2 months.

Lopez was officially named the best player of the 2022 FIFA U-17 Women’s World Cup, winning the Golden Ball after helping Spain win the tournament in India.