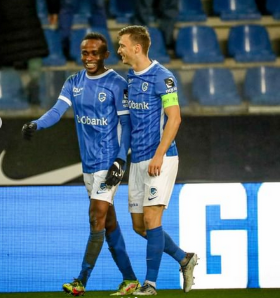 The 22-year-old Sor made his debut for Racing Genk as an 88th minute substitute in a 3-1 win versus Club Brugge last weekend.

The Belgian Pro League leaders explained post-match that Onuachu was surprisingly not named in the starting lineup because he was rested.

Sor's eagerness, dribbling ability and pace resulted in a goal in the tenth minute as the former Flying Eagles winger cut in, outwitted two defenders and powered the ball inside the post to break the deadlock.

According to the statisticians at OPTA, Sor became the fastest KRC Genk player to score on his Jupiler Pro League starting debut since OPTA began collecting this data

Sor saw his stock rise after finishing as the third highest goalscorer in the inaugural edition of the Europa Conference League with six goals to his name, bettered only by Cyriel Dessers (10) and Tammy Abraham (9).