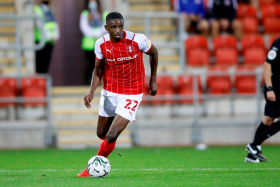 Versatile Nigerian midfielder Hakeem Odoffin has been recognized for his outstanding performance during his side's 4-0 rout of Blackburn Rovers in a Championship match on Saturday, with football statistics website Whoscored.com naming the former Tottenham Hotspur schoolboy in its Team of the Week.

The Millers number 22 broke the deadlock in the opening minute as he smashed the ball home from inside the box.

Odoffin, who is also capable of playing as a central defender, netted his first of the season after 443 minutes of action in twelve matches across all competitions.

Whoscored.com uses statistics to rank players' performances and Odoffin, who was on the pitch for 90 minutes before he was replaced in injury time, earned a rating of 8.22.

⏰ #SkyBetChampionship Team of the Week time!

In a 4-4-2 formation, the 24-year-old is joined in midfield by James McClean (Wigan Athletic), Jeffrey Hendrick (Reading) and Kieran Dowell (Norwich City).

Against Blackburn Rovers, Odoffin won a team-high five aerial duels, made three tackles, one interception and one clearance while blocking two shots.

On the flip side, he finished with a poor passing accuracy of 25 percent and did not register any key passes or dribble attempts.