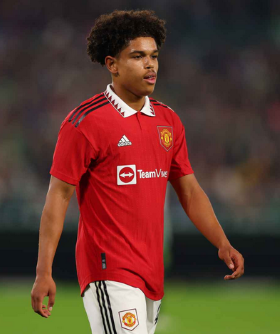 Flying Eagles head coach, Ladan Bosso is on a mission to win the 2023 CAF U-20 Africa Cup of Nations in Egypt.

The onetime coach of Nigeria Premier League side, Wikki Tourists, has invited some foreign-based players to his team ahead of the final squad announcement for the tournament.

There are so many top talents both in the domestic league and across the world but one player that he should consider adding to the squad is Manchester United's young forward, Shola Shoretire.

Shoretire has played in twleve matches for Manchester United's development squad so far this campaign, scoring six goals and was has made the bench for the first team in Europa League, Premier League and Carabao Cup matches.

A move by the Flying Eagles handlers for Shoretire will be quite a great choice because he has big-game mentality having shared the Carrington with world class players.

Shoretire plays for a big club albeit in the youth set up and the quality of games in the developmental squads are arguably more competitive than the leagues that some players in the team play in.

The player's speed, trickery, explosiveness will trouble the defences of Egypt, Mozambique and Senegal at the U-20 AFCON.

The ambidextrous forward who is capable of playing across the attacking lines is extremely difficult to knock off the ball thanks to his low centre of gravity and excellent close control.

Inviting Shoretire to the Flying Eagles is the perfect step in introducing him to Nigeria's football philosophy ahead of an expected Super Eagles role in the future.